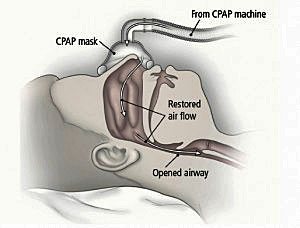 This is Mark W’s essay, the fifth in our series of scholarship winners.

Though not a direct victim of a sleep disorder myself, I do have a young child who suffered from extensive sleep apnea due to the inflammation and enlargement of his adenoids starting at about six months of age. Though we were not given much of a clear reason for the root cause of his issue, doctors informed us that it was most likely due to a combination of bacterial infections and naturally oversized adenoids.

The initial prompt that led to the discovery of an adenoid issue with our son was his excessive and prolonged ear infections, on the order of five or six within a year. It at the time seemed as if he were constantly on an antibiotic and with the concern from us and our child’s doctor, in conjunction with a sleep study, it was decided to pursue the issue further, eventually leading to surgery performed at Children’s Hospital to remove my son’s adenoids at about 18 months of age.

The greatest detriment to my wife and I personally, was the coinciding sleep apnea my son experienced. To us he never seemed to be a deep sleeper and would routinely wake up eight to ten times per night—and waking us up in the process. This of course occurred at the same time as the ear infections. We went along with this, assuming it to be perhaps normal, as he is our first and currently only child. We simply thought it was an extension of the nightly care a newborn required, except now he was around a year old. Months went by and unfortunately the effects of getting heavily-broken sleep and few total hours began to wear on all three of us. I felt as if I was on the verge of snapping after a particularly harrowing series of sleep-deprived nights where I achieved at most four hours of sleep, all while waking numerous times to tend to a crying child.

Reprieve came from a sleep study that verified that our son suffered from sleep apnea. His enlarged and inflamed adenoids were causing him to suddenly stop breathing while he slept, the prime definition of apnea. The doctors quickly linked the ear infections he was suffering and his trouble sleeping to his adenoids and appointments were scheduled for their removal. Within weeks my wife, son, and I were on our way to the Seattle Children’s Hospital where we would be having the surgery performed during that same morning.

As he drifted off to sleep from anesthesia, we gave him a kiss and waited patiently. He was in and out in roughly an hour, and we were on our way home not much longer than that. That night was an immediate change. The telltale amount of snoring and heavy breathing we had gotten used to coming from him was all but gone. A few doses of Tylenol and several nights of readjusting to a rather normal sleep cycle meant all three of us felt, and behaved much better.

The distressing lack of quality sleep had left my wife and I harried. We did fight excessively and were fairly quick to temper during the entire episode. Our performance at work was also beginning to suffer in both minor mistakes and slowed progress. We acknowledged it was the poor sleep we received each night and worked to not let our tested emotions get out of hand. Our son also often acted sluggish and behaved spastically and aggressively due to his own limited amount of sleep. Though we knew it was of no fault of his own and we love him dearly, at the time it was hard not to feel a small twinge of undeserved disdain.

Looking back at it, I am relieved and terribly happy the procedure was done. Our son seemed to suffer minimally during the recovery period and our lives returned to a greater level of normalcy. It would be a suggestion of mine for any parent whose child struggles with sleep and ear infections to query their doctor about the child’s adenoids. The procedure is simple and the results are remarkable—no more ear infections and complete nights of sleep.