A recent blog post by Dr. Michael Breus [email protected], who we follow on Twitter
, discusses the relationship between Type 2 Diabetes Hypertension and Sleep Apnea. According to the report, the American Academy of Sleep Medicine
has issued a recommendation for sleep apnea evaluation in type 2 diabetes and hypertension cases, the first time for such a recommendation. With over 25 million people currently diagnosed with diabetes in the U.S., 90 – 95% of those cases are type 2. While that number is staggering, the accounts of Hypertension (High Blood Pressure) are even higher, affecting a third of all American adults which is close to 67 million people. Often found in those with diabetes and cardiovascular conditions like hypertension, Obstructive Sleep Apnea is estimated to affect over 50 percent of those patients.

Through extensive reports and research, it has shown that those who suffer from OSA are at an increased risk for type 2 diabetes and hypertension, further showing the Relationship between Type 2 Diabetes Hypertension and Sleep Apnea. It also holds true for those with diabetes or hypertension, as they are at a heightened risk for positive OSA diagnosis. All three share major risks factors, the most obvious being obesity. While all the related health issues aren’t fully known but it is very clear that cases of type 2 diabetes and hypertension with the presence of obstructive sleep apnea is common and can complicate treatment if unattended to. The blog goes on to read; “The Sleep Heart Health Study
is a long-term, ongoing, population-based investigation of the health consequences of sleep-disordered breathing on cardiovascular health. This research has revealed a strong association between the disordered breathing that is a symptom of sleep apnea and hypertension. The results are striking in particular because they indicate the risks of OSA to high blood pressure are not limited to traditional high-risk groups such as the obese, men, and older adults. Instead, the study has found elevated risk for high blood pressure among middle aged and older adults, men and women, people who are overweight and those who are normal weight.”

The Following Referenced from The Insomnia Blog

Recent research has also shown the relationship between OSA and high blood pressure:

Studies have indicated that OSA may disrupt normal glucose metabolism and increase insulin resistance, which is the underlying mechanism of type 2 diabetes:

Research showed that treating OSA can lead to improvements in hypertension and type 2 diabetes:

The Sleep Doctor goes on to review and discuss the evidence. “This recommendation by the AASM makes a great deal of sense, based on the abundance of evidence we have linking these conditions and the complications we know can arise when sleep apnea is left untreated.” He also states that it is necessary that all the recommended evaluations are scheduled and carried out by the proper qualified physicians in order for these risks to be lowered. 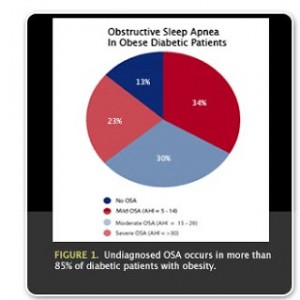